My wife Julie and I recently traveled from Knoxville to Kansas City (near her hometown of Topeka, Kan.). In addition to a great tradition of jazz, Negro League baseball and BBQ, Kansas City is known as The City of Fountains. We toured only a fraction of the 48 publicly-operated fountains, and found some inspiration that could be adapted if you’re considering including a water feature or fountain in your own landscaping.

Muse of the Missouri Fountain 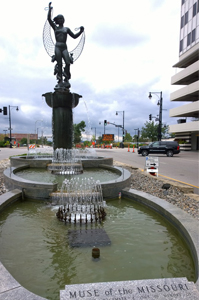 The Muse of the Missouri fountain (designed by Wheeler Williams and dedicated in 1963) decorates the median of Main Street in downtown Kansas City. This fountain, representing a goddess watching over the Missouri River, is impressive not only because of its 200 spouts of water but also because of the surrounding plant material. The grasses lend a softness to the space that is in stark contrast to the fountain itself as well as the surrounding buildings.

To get this look at home, plan for ample area around your water feature to allow for plenty of plant material, and consider mimicking this look if you have an expansive patio or other hardscape elements. 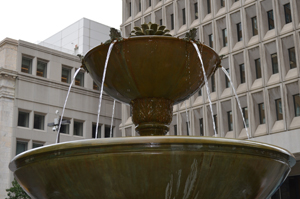 This fountain, located at the intersection of 10th and Main Streets in Kansas City, Missouri was designed in 1999 by Lori Doolittle and Alvin Holm who drew inspiration in part from an ancient stone bowl in the Nelson-Atkins Museum of Art (another Kansas City area attraction). This style of fountain, with its bowl shape and tiered levels is commonly seen on a smaller scale in formal gardens or in the center of circular driveways.

To get this look at home, you’ll definitely want to opt for a smaller version, but the tiered look is commonly available in styles for residential homes. Before embarking on a shopping trip, consider whether or not this super formal look is appropriate for the style (and size) or your home. 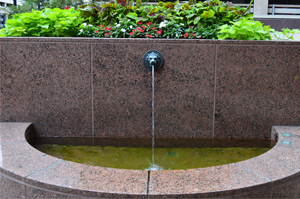 The Commerce Bank fountain (also at the intersection of 10th and Main Streets) is a slightly smaller showpiece than the William T. and Charlotte Crosby Kemper Memorial Fountain (mentioned above) which is across the street. This style of fountain, with its spout spilling from an upright wall, is a common style for small, private, walled gardens in urban settings due to the compact design.

To get this look at home, consider including a wall-mounted fountain in a secluded patio area such as under a deck or beneath the shade of a pergola. 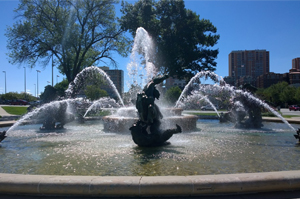 The J.C. Nichols Memorial fountain (located at the entrance of Country Club Plaza) was designed in 1910 by Henri Greber but not installed until 1958. The fountain’s four horsemen — representative of the Mississippi River, the Volga River, the Seine and the Rhine — have made this fountain a powerful one that is the most photographed in Kansas City, according to The City of Fountains Foundation.

The thing we loved most about this fountain was the sound. To get this at home, be sure to incorporate your fountain or water feature in an area that is close to seating. You’ll benefit from the relaxing sound of running water whether it’s a roar like this one or a simple drip from a bubbler fountain. 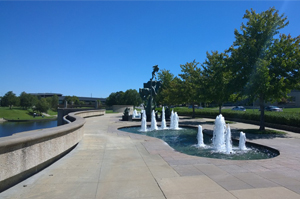 Located on Volker Boulevard and Rockhill Road near Kansas City’s famed Country Club Plaza, the William Volker Memorial Fountain (designed by Carl Milles) is representative of its namesake’s charitable giving and philanthropic involvement in the community.

The water element of this fountain is quite simple with two pools on either side of the main statue, but the statue itself creates an intricate look to the entire area. If you get the chance to see this fountain in person, look for an angel playing a flute from the wrong end and another sporting a wristwatch — which proves that landscape design can be funny.

To get this look at home, you might opt for a basic fountain (or pond) basin with a sculpture or other art piece standing out as the real showpiece. I always give a word of caution to those who are interested in a fountain or water feature with a large basin of standing water. They can be difficult to maintain, so be prepared for that commitment or opt for something a little less needy.

The best advice I can give for anyone thinking about incorporating a water feature or fountain is to consult with a professional as there are many things to consider both from a design perspective as well as a technical one. To arrange a free consultation fill out our online form or contact me by phone at 865-765-5550. You can also check out our water feature Pinterest board for more inspiration. 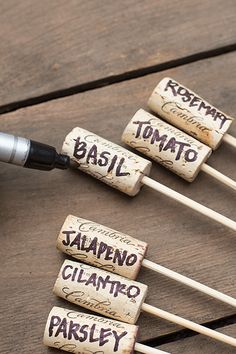 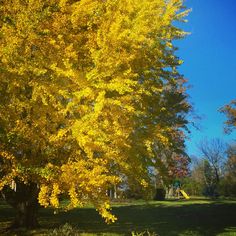 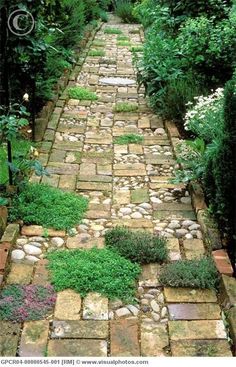